Start a Wiki
Hotel Ceiling is the 12th episode of Supergirl Season 7 and the 132nd episode overall.

A DEADLY GETAWAY- Lena Luthor, Lyra Strayd, Lillian Luthor, and Lor-Zod are held captive inside the Grant Hotel when Agent Orange takes the entire establishment hostage. They must work together to survive, which proves challenging. In Metropolis, Dawn cozies up to LX-52. Livewire tries to ingratiate herself to J'onn. 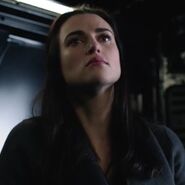 Add a photo to this gallery
Retrieved from "https://cw-series-fanfiction.fandom.com/wiki/Hotel_Ceiling?oldid=49075"
Community content is available under CC-BY-SA unless otherwise noted.