Garfield Logan is a young Meta-Human teen who can shape shift into any animal he chooses. Due to being experimented on, he lost almost all of his memories.

Garfield was being experimented on by the N.O.W.H.E.R.E. Agency, an organization dedicated to hunting down and experimenting on Meta-Humans to see what made them tick. He, along with Rachel Roth and the other Ravagers, was one of the experiments before he managed to break out. Transforming into a gorilla, he battled the guards before breaking Rachel out as well, believing her to be the key to unlocking his memories.

Garfield, despite having lost his memories, is a joker who always tries to lighten the mood everywhere he goes. 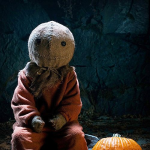