Adriana Van Helsing is a huntress, vampire-witch hybrid, and a member of the Wolfsbane Order.

Adriana was born on Halloween night to the vampire Rose Harker and the hunter/witch Ross Van Helsing. When she was eighteen years old, she began exhibiting vampiric abilities along with Witchcraft. Wanting to spare her from their lifestyles, they went to an old friend, Mildred, and had him suppress her powers. It worked for a time until she attended a party on her twenty fifth birthday. A girl had gotten a cut on her wrist and Adriana sucked her dry of blood. Rose told her the truth and sent her off to the Wolfsbane Order. Accepting her new life there, she was trained in Witchcraft and also trained in how to control her vampiric abilities.

In the present day, Adriana is hunting for a werewolf that has broken out of its cage. She goes into an old, derelict house and instead of finding the werewolf she finds a monster being brought to life.

Adriana is head strong, stubborn, and confident. She is also sexually confident and isn't afraid to seduce any girl or guy she wants. When she goes into Huntress Mode, she can be a bit primal like an animal.

Adriana is one of the tallest people in the Wolfsbane Order, standing in at 5'8. She has long dark brown hair that she wears in ponytails at times. She likes to wear t shirts and jeans. She sometimes wears dresses that compliment her fit and shapely figure.

When she goes into Huntress Mode, her light brown eyes go red and she sprouts fangs from her mouth. Her fingernails transform into sharp claws. 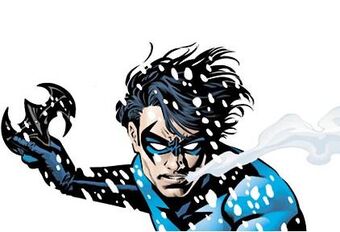